Don't compare your life to others'. You have no idea what their journey is all about.

The eagle has landed

Ok, just Tat and not really landed, but finally arrived at NAYC in Northampton. 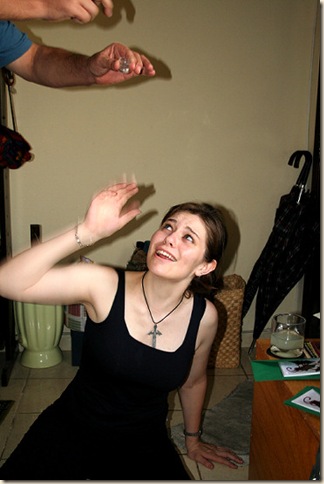 The photo, by the way, is Jurgis tormenting Tat with glitter. She was responsible for putting glitter on all the Christmas cards. He decided she needed to be 'embellished' too. That was a "Nooooooooooooooo.........!!" : )

I got a text message from Tat saying she was all settled in. I called her to make sure. It's a mom thing. Apparently their rooms are pretty small and wardrobe space equally small. The place is nicely heated and comfortable. The rooms are attractive and everyone has been very friendly.

She had a Welcome to England package waiting for her too!! Word has it that this person loves purple. Thanks so much, Katey!! You had Tat laughing. I could hear the excitement in her voice.

One way or the other, Tat is now settled and unpacked and appears to be enjoying herself. All is well : )

del.icio.us Tags: nayc,tatiana,england
Posted by Tint~ at 7:30 pm No comments:

I just spoke to Tat. Her flight appeared to be ok with a slight 'drawback' in her seating companions. She was next to two middle-aged, balding gays who held hands and smooched and sniffed loudly throughout the flight. Her one bag was torn on the flight, so we're hoping she can claim on that. It was her very tough Scout camping bag. The darn thing was shrink-wrapped a gazillion times too. She arrived at Anne's and managed to get a call in to me. She's cold... her ears are cold, poor thing.

del.icio.us Tags: flight,tatiana,england
Posted by Tint~ at 7:27 pm No comments:

A letter to my daughter

A Daughter's Gift
She is ever-unfolding: growing, changing, becoming. Her gift - like the gift of life itself - is the renewal she brings to your own spirit, as she aspires to be all that she might be. 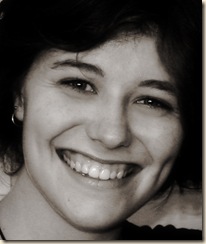 A Daughter's gift by Robert Sexton When I imagine the life you will live I think of the pleasure Your presence will give. I see the joy your smile will light and the wonders you'll weave when your dreams take flight. I feel the hope that will grow with your grace and the difference you'll make to each heart you embrace. I imagine your life as I know it will be; for, my daughter, you've given all this to me.

Considering we usually have difficulty keeping quiet, we've had remarkably little to say lately. I know, for me, it has been because my mind and my heart have been too full with too much to say. I suspect it's the same for you.

Tomorrow, we will take you to the airport. A whole new world awaits you... a whole new life. I know you'll do well. I still have that busy-body mom thing going on where I want to tell you to take an umbrella or make sure you have your own pack of tissues in your bag. Instead, I guess I really want to tell you to never stop smiling. It is your smile that people fall in love with, that smile that lights up your whole face and makes your eyes shine. It's not for nothing that within weeks of moving into a new place, people all along your route greet you and know your face. You are well loved. Remember that. Just do your best at whatever you do and do it with that smile we all love. Be happy. Be yourself.

I'm going to miss you so very much. You have taught me to laugh. You taught me how to make the world around me a bright place. You did that for me... my ray of sunshine. Not a day goes by that doesn't have us laughing... belly-aching, tear-streaming, unconstrained laughter. You're my other half (my other head?). You think people will still stare up there? Nah... if they do it will just be because you're pretty and have a radiant smile. You're crazy, you know. I'll miss that craziness. There aren't many people who see the world as strangely as we do. I'm going to have to take notes, so we can laugh over them when we talk. Thank goodness for technology!!

Again... so much to say and the words won't come. I know you know those words though. You know me so well and yes, we've said them so many times before.

I love you!
Mom

PS. Did we pack tissues??

del.icio.us Tags: tatiana,tat,love,letter
Posted by Tint~ at 4:28 am No comments:

I found this guy through Google. 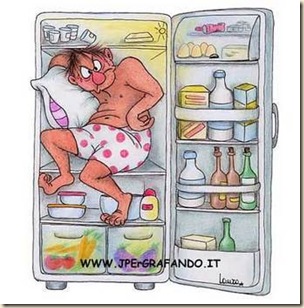 I was just thinking. I need to defrost my fridge. Should I try it? It would cool me down and soothe the sunburn and the heat my sunburn is giving off is bound to defrost the fridge in record time. Oh wait... I can't fit into the fridge =/

del.icio.us Tags: weather,heat
Posted by Tint~ at 9:05 pm No comments:

Email ThisBlogThis!Share to TwitterShare to FacebookShare to Pinterest
Labels: weather

Is anyone else freaking out over the weather? We're in our second day of flood warnings. This was our area yesterday:

Luckily we are high up and not affected unless we go into town, which is what we have to do this afternoon. I'm taking boots, umbrella and water wings... oh and a book to read in case we get stuck.

This is what Tat may be going into in a couple of weeks if the weather in the UK doesn't ease up:

(See the article in the Sun)

She's taking a chisel. She recons if she has to freeze her butt off, she may as well chip it off properly and slim down ; ) According to one report, the UK is facing it's coldest winter in the last century, right through to March. Fun! I really need to make a plan for a camera for Tat. This can't be missed!

Here I was, merrily composing my phenomenal (yeah right) year end/year start blog when Tat let me know there was someone at the gate. It was the girl from across the road. She's a sweet girl. 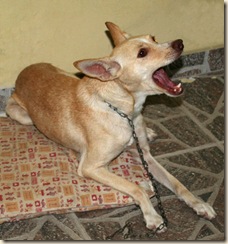 A quick snap of Tchuca. Odd photo, I know, but she was yawning here. I had to take it in the dark. She had woken up and started yelping again *sigh* Did I mention that she's extremely hyper? In 6 photos, this is the only clear one of her face.

We've all been very worried about a dog across the road. This dog howl-yelps constantly. It was chained to the front door knob. It had access to a tiny porch - 2m x .5m (6ft x 3ft). The dog would periodically jump over the porch wall and the chain would get stuck, preventing all movement. We spoke to the woman living there. Apparently she was 'looking after the dog for a neighbour' and tied the dog up because the dog would otherwise escape through the bars on the road wall.

Our mild irritation at the noise turned to curiosity, and later alarm, when a huge truck loaded up the contents of the house yesterday. We said nothing and just watched to see what would happen. The dog was still there today with no sign of the people. The girl, their neighbour, came to tell us that apparently the guy had left or was travelling (I'm not sure of the story) and the woman had gone to stay with her mother. The inconsistencies don't stop there either. Apparently she told her other neighbours that someone was looking for a home for the dog and they adopted it.

In the meantime, the dog was still howl-yelping... it's a small dog and the sound is high pitched and enough to drive you insane.... aside from our concern for the welfare of the dog. The problem here is that I have two big dogs, one of whom isn't very friendly to little dogs. We can't keep this dog. Our dogs are now shut in the back. Dingo won't leave Romany and Romany can't be with the little dog. I don't think he'll hurt the little thing, but I can't take the chance. The little dog is in the front. We had to tie her to a post, as our bars are too wide to keep her in, but at least she can run. She's tied in a way that prevents her wrapping the chain around the post. She has loads of shelter, a cushion to sleep on, and has had treats. She has worms too. Fortunately, we had some worm tablets on hand.

What kind of people would take on someone else's dog then move off? They obviously had no time for the dog when the were around, then they just upped and offed. Brazil has little or no 'help' for cases like this. No RSPCA or any such organisation. We did find an organisation and reported the situation by email (they have no phone number to contact). We'll see what happens. At least the dog's incessant howl-yelping has stopped for now. Perhaps I'll even get to sleep tonight.

On the subject of dogs. We were at the pet shop the other day. We saw Kong dog toys and I remember them being mentioned around here, so I went to take a look. This same toy:
http://www.lnt.com/product/plush-toys/168827/medium.html del.icio.us Tags: dog,abuse,neglect,rant
Posted by Tint~ at 12:32 am No comments: